It takes a couple of days for the kiln to cool down. It was still a 100 degrees when we checked, but by slowly taking down the wicket door, it is sufficiently cool to pick out the first pot. It looked like an OK firing, cooler at the bottom than usual, but the big bowl at the top had not slumped as we feared.

It is a strange sensation opening the kiln. You have an idea what the pots might look like, but they never fully match up to expectation and it can feel a bit of an anticlimax. The more interesting pieces are put to one side and sit on the dining table for a couple of days as I get to know them and usually the 'Black dogs' disappear and it is maybe an acceptable firing after all.
There were one or two real goodies and all the little pots for an order were all ok too. 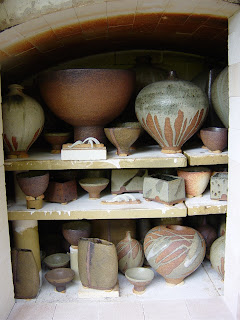 Now I have to clean them up, get the wadding off the bottoms and grind off the bits of glaze that has run into the wadding. An unpleasant job and I leave it as long as possible.

The last couple of days has been fully occupied with making wooden lids for the boxes. It is really nice to work with a different material and finding the right bit of wood for each box is a challenge. My Dad left me a box full of offcuts from his stick making, I don't know what some of it is, it is very dark and extremely hard, possibly Laburnum. Takes ages to polish, but the effort is well worth while. Once they are done I will take some photos and update the website.

Last couple of days a Pigeon has appeared, very tame. It allowed me to pick it up, it's very young, possibly someones lost racing Pigeon. It has no leg ring, so I've christened him Bob. He was back again today, pecking the seeds from the Valerian while I had a bit of death and destruction with some pallets. 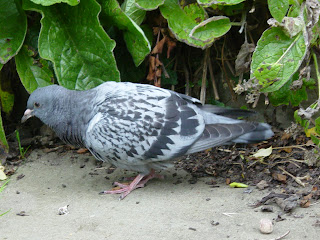 Starting the work for the next firing already!
Posted by David & Laura Wright at 21:19