Did you carve it?

It's a hard life, I just knew that this was going to be one of those events. The Melbourne Festival and Arts Trail is always interesting, Artists are put into all sorts of venues, ranging from peoples homes, Estate agents, Church Halls even the Undertakers. We were in the Catholic Church Hall and as I had been down to demonstrate making on the stand, we set up on Friday. The stand looked good, and Laura had done the business with the flowers, and the clay and few tools I need and use were at the ready.
I had hardly begun on a large jar when the first visitors arrived and having fielded the first questions about throwing. ( I get a lot of that )! Someone asked if the bottles were hollow, were they carved and how did you get the clay out of the middle. To complicate things the concept of spending a day or so making something and then putting it in a kiln and taking it to temperatures five times more than a domestic oven proved too much and the poor soul retired looking even more confused. 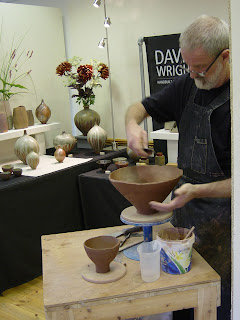 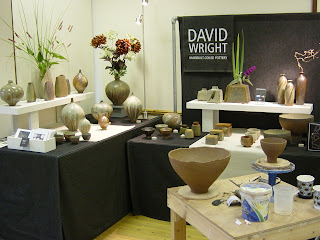 By Sunday the pressure was beginning to tell and a walk round to look at some of the other Artists, restored my belief in what I do and there was a final push to finish off the rather large vessel. I was still getting asked if the pots on display were thrown, even though the rather large sign says Handbuilt, Coiled Pottery and a large three quarters finished coil pot sits there in front with me rolling clay for Britain.
There was a steady flow of visitors all weekend, some interest and a "They look nice Enid, bit pricey though" It's amazing how people are completely oblivious to your presence if you are working and say things they wouldn't say to your face. We sold next to nothing and have retired hurt.

To salvage something from the weekend, we decided to try and get the jar home. Laura sat with the pot wrapped in a towel on her lap and I drove sedately home. Amazing how many roundabouts there are and how much you lurch left, right and left again on the forty minute drive back. 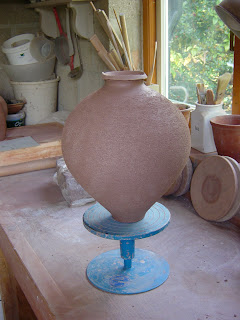 The jar survived and some minor attention next day has rescued the piece. Next problem. It's too big for my little electric kiln to bisque fire.