Getting the best out of Bertha. 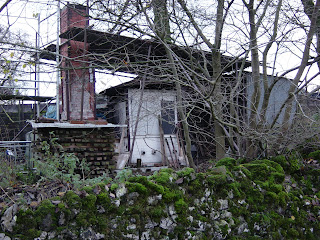 Having a kiln not far from Buxton, the highest town in England, built on an exposed hillside open to the elements, little in the way of insulation and a firing planned for the end of November is not the ideal. But with a need for pots for the impending Christmas events there was little option.
Bertha is an Olsen fast fire, built along the lines of the Joe Finch wood fire version found in his book. Bertha is beginning to show her age, largely due to exposure to the elements and lack of tender loving care. Being single skin and of high temperature bricks, the effects of several over enthusiastic stokers have taken their toll and the back of the fire boxes bulge and many of the bricks are cracked and have large gaps around them. The kiln also features the tallest chimney I have ever seen on a kiln of this size and must qualify for red lights to warn low flying aircraft. Why is it that Potters whack another six rows of bricks on the chimney when they experience firing difficulties? 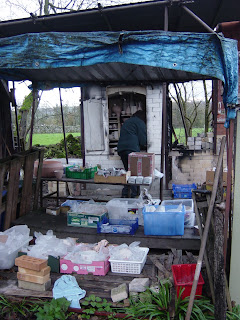 The usual routine is to get up to Blackwell, about two hours drive, clean out the fire boxes, and start the pack. Slowly the other participants arrive with offerings for the kiln and we usually finish packing around six, close the wicket, put on the gas burner and head for the pub for a pint and dinner.
It takes some courage to leave the log fire in the pub and head out to the kiln site. It was bitterly cold packing the kiln but now the temperature is plummeting and it is below freezing. The pyro says 130 and I light one of the fires with off cuts of oak strip wood. We fire with fire box lengths of oak, quite small in section, 25 X 25 up to 25 X 50 millimetres. Sue managed to get a huge stack of the stuff and this must be the 5th firing using this wood. 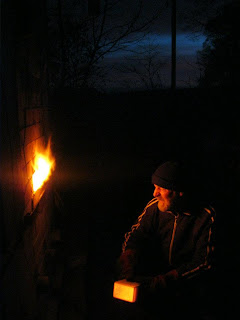 Everyone has gone, there is just the two of us left to fire the kiln through the night. I light the second fire for the fire box next to the chimney and the temperature slowly rises. Bertha responds to a light touch, two or three lengths each stoke otherwise there is masses of black smoke and the fire comes back out of the fire box. Gently does it and by 4 am the passive damper in the base of the stack is out and we are aiming for some body reduction. The sliding damper broke off some time ago and still isn't fixed. We leave the passive damper out to get some heat to the bottom of the kiln and hit 1000 degrees around dawn. It is a beautiful dawn, the Owls have gone to sleep and the Blackbirds are kicking off their territorial squabbles. 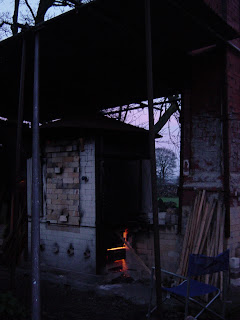 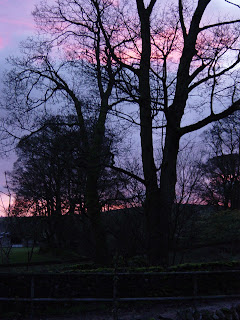 There was a loud thump and the sound of breaking ceramic around 300 degrees. Can't see anything, so we carried on, pretending nothing had happened. It will be revealed in two days time.
Norman arrives around nine so I grab an hours sleep in the back of the van and around twelve o'clock cone nine is well on it's way. Still easy on the wood, three pieces each stoke, black smoke and the temperature drops. The smoke clears and the temperature rises slowly, disregarding the pyrometer which has a mind of it's own and claims it is only 1150 degrees we have cone ten over. At one o'clock Sue decides we have finished and we call it a day, clam up and I head off home.
I couldn't make it for the opening,  I thought about the firing as I got ready to head off for Welbeck and the Harley Christmas Fair. Would it be alright. Would the Shino be ok. It was risky to try it on so many pots without testing first. All that work and effort invested could be ruined at a stroke.
Was it a good firing?
What was the sickening thump during the night?
Would there be Christmas pots for all? 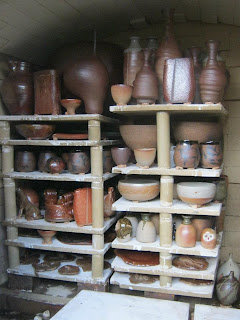 After what has seemed ages, we have enough pots assembled to fire the Thrussington kiln. Although the kiln is only just over twelve cubic feet, it takes an awful lot of small vessels to fill it and it needs to be tightly packed to get the best results and be economically viable.
The wood is stacked and seasoned after a long dry summer, we are at last ready to start packing the kiln.
I normally work alone with help from Laura, so it was good to hear from Steve who wanted to come along and share the experience. He came armed with a couple of tea bowls for the kiln, chocolate fudge cake and flowers for Laura so it was impossible to turn him away.
It takes all day to pack the kiln, close the wicket and get everything ready for an early start in the morning. We check the weather, only torrential rain will stop us now, so a dismal, grey cloudy day presents no real problems. A big fry up is the key to a good firing and plenty of tea and once the Chickens are out it's time for Laura to light the fire. 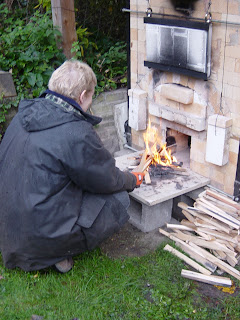 Usually the small fire takes hold quickly and we have to hold back the fire and keep the long flames produced from burning softwood from licking the pots. For some reason the fire was reluctant to go anywhere, maybe it was the high humidity and damp wood from the top of the pile, but three hours in we were still only two hundred degrees in the chamber and things were going very slowly. Moving to the top of the fire bars and reducing the air into the kiln got things moving along and at the six hour mark we started body reduction. With all the cones over and an even colour top and bottom we did our final reduction, allowed the atmosphere to clear and closed up and called it a day. Just over twelve hours and it felt like it would be a good firing. 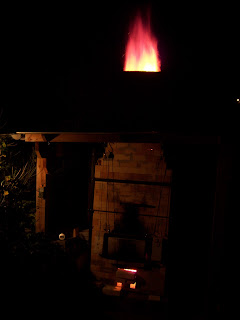 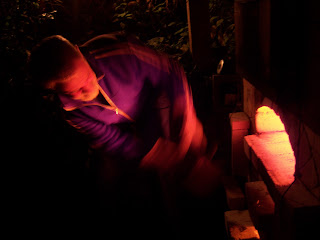 It was three days before we could open the kiln. Always an anxious part, quick peek into the spy holes and confirm the cones were all flat, we slowly take out the wicket. The tops of the big pots at the top looked good and the rush of warm air met us as the wicket is dismembered and stacked for next time. We all eagerly squeezed into the narrow opening and looked at the contents of the kiln, seeing new pots for the first time, never exactly as envisaged, but exciting all the same. It was indeed a good firing, some real beauties waiting to be discovered in the midst of the body of the chamber, still warm and pinging as the glaze settled. The finale to two months of work and thinking already of the next firing and the little changes one might undertake to make it even better.