Finally get the pots from the Buxton firing, delivered in three banana boxes and wrapped in news paper and much re used bubble wrap. It wasn't possible to examine the pots straight away, merely a cursory glance. They appeared ok. Later that night it was possible to examine some of the pots in more detail. The big bowls were under fired, the ash glaze had not run and pooled as hoped for. The shino on the other hand  had behaved beautifully, orange where it had been thinly applied, a fat white where it was thicker. There was some carbon trap in places and the best piece was a simple bottle made from black clay which had stained the shino so that it was a dark red. 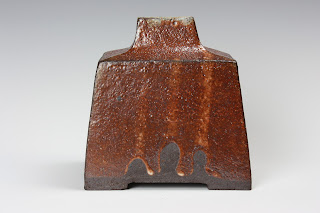 What of the thump in the night? A large bowl placed on the top shelf had exploded sending fragments throughout the kiln. There were several casualties, some bowls with bits of pot fused into the glaze in the bottom and other pieces with sharp appendages. Luckily there were plenty of the smaller pots intact and after a couple of weekends at craft fairs a good proportion have found new homes.
Almost another year complete, time for reflection, send off applications for next years events and plan new work. There are wooden lids to be made and wire handles to be fitted. Wood to be found, cut and stacked, new chimney bricks to be bought. 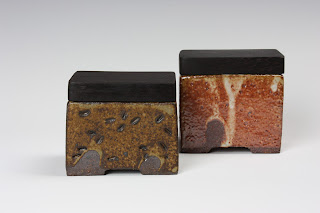 A potters work is never done.
Posted by David & Laura Wright at 21:40 No comments: