I can't remember clearly when the boxes really started. The first were probably made when I started evening classes, back in the 70's. They were slab built and I hadn't worked out how to make lids from clay. Having free run of a well equipped workshop where I worked, it was logical to make the lids from wood. Besides I had time on my hands, as a craft instructor there was plenty of time at each end of the day. When I moved on, the workshop went also.
Being pretty much self taught, making ceramic lids for box shapes was very much trial and error and finding a satisfactory method was elusive. The chink of ceramic on ceramic is unpleasant and the lids rattle.

Dad made sticks, you could say he was a master stick maker. He was an engineer by training, the Army taught him to strip down Tanks and drive them and he finished up in the Sudan Defence Corp rebuilding diggers. When he returned home after the war he went back to being a machine engraver and started making sticks in his spare time. He won cups and trophies and in 1996 he was third in the British and UK Stick making Championships. I think he would have liked me to pick up the baton and make sticks, but working to engineers precision and set patterns is not really what interests me and I could have never reached his level of excellence.

He worked with all kinds of wood, sometimes horn. One day he gave me some off cuts of wood that had too many defects for sticks, but they had a random beauty in the grain that worked with the random beauty that happened in wood fired glazes. I toyed around with the idea of making wooden lids again but didn't get around to it until he asked me several times how it was going. Making sticks was getting difficult, his eyesight was not good and I think he knew that they were not of the high standards that he set, becoming too inferior to exhibit. We talked often about using the wood, so I made the first couple of boxes with wooden lids for thirty years.

Dad never made comment, I don't think quirky ceramic boxes with carved lids were in his world. His sticks have flawless lacquer finishes. I oil the wood and chose the pieces with the most interesting defects. Dads sticks are perfectly smooth, not a file mark or scratch, I leave chisel marks and the odd worm hole sort of goes with the look. I have left the bark on some pieces which is definitely frowned upon.


When Dad died last year I inherited all his tools and bits of wood. I don't see myself as the next generation of master stick makers, but using his tools and bits of wood for box lids is strangely satisfying, I'm sure that's what he would have wanted. Working with wood is so different from working with clay. Make a wrong cut or slip with the chisel and the piece is ruined. Clay is malleable and can be bent, stretched and pushed around. Every scratch mark shows on wood, bits split off if you treat it wrongly, it will only cut one way, so you have to study the grain. Clay can be squished, recycled and start again.

With wood the final glory and beauty in the grain is hidden and is only revealed right at the end after painstaking sanding with fine grit and the last coat of oil is applied. Here is the only similarity with clay, the final beauty is only revealed when the wicket is down and the ash and fire has done it's final polish. 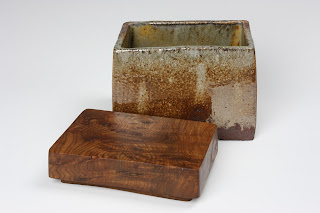