The Met. office indicated 100% humidity and high pressure, 1012 mb.
So it's going to rain then?
I packed the kiln in drizzle over a couple of days. One day it rained too heavily to pack the kiln. I'm not disposed to run from the conservatory, where the glazed pots are, with an umbrella to the kiln at the bottom of the garden, so that day was spent doing other things.
Woke at five, I still get excited about a firing and got up at six. We always start with a full fry up on firing days. It's a tradition, anyway it was raining. Hasn't rained all winter, there are drought warnings, but at least the brook is running again.
Laura lights the fire. That's another tradition, whilst I chop sticks and sort out wood. We were started and going well by 8 am. Should be finished by 8pm. 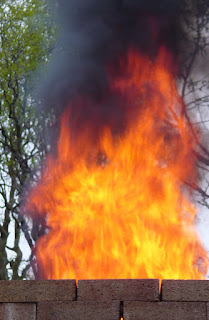 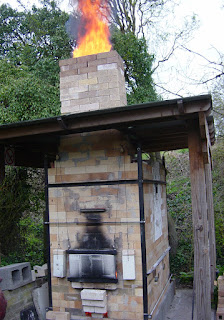 The rain petered out and the rest of the day was fine, the firing went to schedule with little incident and 1200 was reached in eight hours. It was apparent that the top was hotter than the bottom, so I put in the damper, closed nearly all the air into the fire box in an attempt to let the bottom of the kiln catch up with the top. It had some effect but getting cone ten to fall seemed to take an eternity. Cone eleven was absolutely flat at the top. 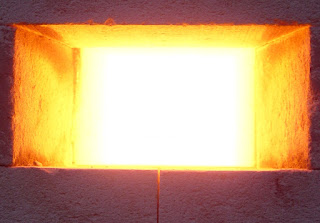 Finally closed down after 12 and a half hours of firing, deciding that the top was well done and the bottom shelf would have to do as it was. Clammed up and had dinner.

We went to Cambridge the next day, whilst the kiln cooled, to meet Eleanor, hand over wedding photos on CD's and have a day out. It takes one's mind off the kiln, still radiating great heat, with little pings and other worrying noises.
It's a few years since we last went to Cambridge and the Fitzwilliam had been closed for renovations so this was an opportunity to see the Toft slipware and the Chinese and Korean stoneware collections. It was very uplifting to see all these wonderful pieces. A small Song bowl was a delight, finely made, perfect poise and proportion with an oil spot glaze to die for.
We wandered around town (in the drizzle) and found ourselves in Cambridge Contemporary. It was probably a mistake to go there after the Fitzwilliam, some of the ceramics were crude, not well made with brash glazes. Not much progress since the Chinese were making such splendid work around 1200 then! 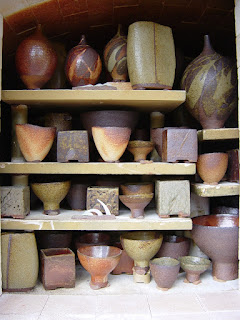 Finally opened the kiln. We had invited friends to come and share the excitement (or disappointments). John and Tina are not potters, we have known them well for over 30 years. I don't think they could understand why I should give up a well paid job to play with mud and set fire to it. But they had both wanted to come and see the kiln being opened and it was great to share Tina's whoops of joy and excitement as each piece was handed out.
When all the pieces were out and placed on the paving, it was like a Christmas feast, with pots being picked up and re examined. Tina had to go back for seconds. 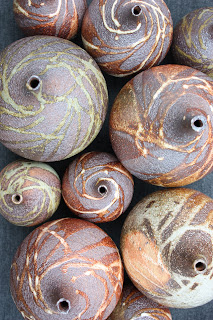 It seemed like it was a good firing, despite the reluctant cone ten. Probably the best yet out of this little kiln.
Posted by David & Laura Wright at 22:42