A Week at Bevere

When the possibility of a group exhibition for CPA Associate members at the well known Bevere Gallery was mooted, I naturally threw my hat in the ring as it were. The group show morphed into a series of smaller exhibitions featuring two or three potters at a time with the possibility of a residency. I was rewarded with a display of work for the month of June and a weeks residency in the grandly titled Stable block.
I had dropped off my six pots in May and duly toured my potential home for a week. The Stable block is in fact a well appointed shed with a sink, hot water, worktops, spotlighting and big glazed doors opening out onto a courtyard.
"Do what you like with the space, make pots, engage with the visitors and explain the black arts of coiling"

Day One.
I arrived early... way too early and sat outside wondering what I had let myself in for.
I pinned photographs on the walls, arranged a selection of pots in the pigeon hole display and put a few flowers plucked from the hedgerow into a group of vases on a shelf in an attempt to make it my space. I set up my workbench and set to work. The good thing about coiling is you don't require much equipment and pots were already started when the first visitors arrived. They were more interested in the photographs and left.
It was a dismal, dull day, very cold and the few visitors ventured no further than the cafe and gallery, so I worked on alone, plied with tea and coffee by Kim and Ruby and the row of little pots grew. 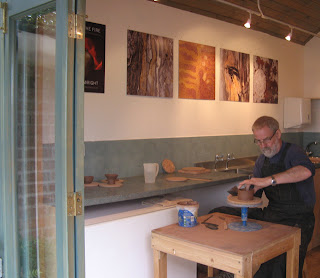 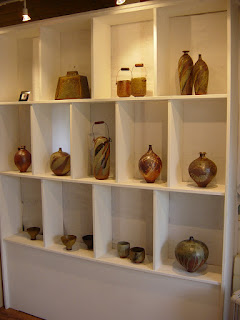 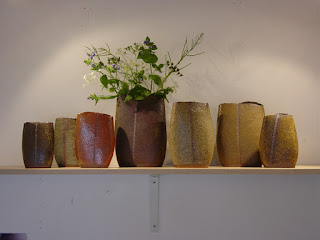 Jason and the Juggernaut.
Towards the middle of the afternoon a shipment from Cornwall arrived in a big white truck. It was to provide the evenings entertainment.The tail lift jammed halfway, part way through the unloading. A faulty battery was diagnosed but when Jason the driver tried to remove it, the battery exploded. Eventually a man in a van arrived to fit a new one, but to no avail, the lift stayed put, neither up nor down and the last huge sculptural piece had to be man handled off by lifting onto rollers and gently lowering onto the lift and letting gravity lower it to the ground. The lift was now truly stuck and the truck was going nowhere.
So now I had a unexpected dinner guest and a trip to the Chippy, juice from the cafe and a brew up or two and Jason retired to sleep in his wounded truck and me to sleep in my van.

Day Two.
Woke at 5am to the sound of Wood pigeons cooing and flapping and looking for Lurve.
I lay planning the day ahead, that is, transition from warm sleeping bag to cold outside toilet and thoughts of pigeon casserole.
We made tea and decided to give the reluctant lift one more try.  Jason took the cover off the hydraulic ram, started up the truck engine and whilst he pressed the start button to the lift, I whacked the motor with a piece of wood and hey presto, the lift majestically rose and Jason was on his way.
It was brighter today and folk sat outside drinking coffee and eating lemon drizzle cake. A few ventured inside 'The shed' and I sold a small cup to a painter and that was it...the row of pots grew.

That evening I visited Mark Griffiths, drank Ludlow beer and we made plans to fire his kiln end of September. We looked at his latest shino work,  bemoaned the lack of sales and eventually retired much mellowed by the beer.

Day Three.
A beautiful dawn and after toast with jam and tea from a Mark Griffiths tea pot it was back to Bevere.

Today I finally confirmed the correct pronunciation of Bevere ... Bev-er-ee. What is it about the English language and names? Try googling Bev-er-ee and see how far you get.
The weather got worse, few visitors ventured into my little domain. A couple of pottery enthusiasts arrived. One gave me a lecture on the chemical make up of clay and the inherent problems of including grog. Life's too short to to worry about that. It's only mud.
The other was convinced that my work was Raku. It was his only ceramic experience and the only true way to make pots. Ah well, I've wasted thirty years.
The heavens opened and I sat in the shed surrounded by pots refusing to dry... where is summer when you want it? I guess it's hotel Caddy van again tonight.

Day Four.
Day three and four were one, or so it seemed. Torrential rain hammered like machine gun fire on the metal roof, the van swayed in the wind and bits of tree clanged of the bodywork. Dawn couldn't come fast enough. I thought of moving the van but I could imagine the scenario of driving in my underpants and bare feet in a storm... "Been drinking have we sir?" "No just scared witless"

Only a couple of visitors today. "Are these Raku?" I worked on watching the ladies in the cafe eating lemon drizzle cake or should it be lemon deluge cake?
Alastair and Kim invited me back to their home, watch the England game with their boys and have supper. The joy of a hot shower and a real bed. We handled and discussed their impressive ceramics collection and talked pottery stuff. I guess it's interesting to meet makers and artists and talk in depth. The opportunity is never there when we drop off work and rush off again. Anyway I was saved from the storm  and next morning we drove back through huge puddles and sodden Landscape.

Day Five.
Wet and windy again, a couple of potters stopped by, I felt they were bemused by the fact that I build with coils and don't throw and then it was time to pack up say goodbye and muse on the weeks events. 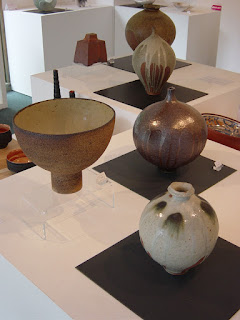 So that's a residency, I often wondered what it was like on the other side. Kim and Alastair work incredibly hard and are as vulnerable to the whims of weather as me in my little shed. It's a beautiful gallery in a wonderful garden setting, well lit, plenty of natural light and my pots were well displayed. In fact I had to take a second look to see if they were really the ones that I had dropped of a few weeks before as I hardly recognised them on the white plinths and sparkling under the spotlights.

At the seat of the Ancient Kings

We are really privileged as potters to get to exhibit our works in some of the most amazing locations in Britain, or Europe come to that. 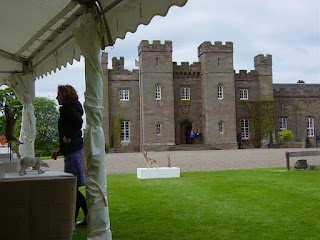 Scone Palace near Perth in Scotland was our most recent venue and the sun came out from behind the rain clouds long enough to get a few photographs. It was bitterly cold, and everyone sported several layers of clothing and hugged mugs of hot tea for comfort. The Geordie boys did brisk business selling mugs to everyone who had forgotten to bring their own. 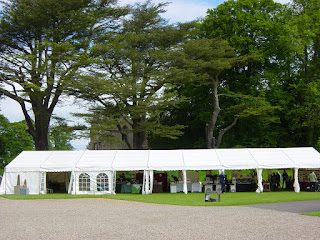 Scone Palace was an important religious gathering place of the Picts and the site of an early Christian church. Robert the Bruce was crowned here in 1306 and the coronation of Charles II took place in 1651. Caislean Credi, 'Hill of Credulity', survives as the present Moot Hill.
The present owner, the 8th Earl of Mansfield succeeded his father in 1971.
He didn't pop round for a mug of tea, probably more likely taking part in the Queen's Diamond Jubilee celebrations, which happened to be at the same time as Potfest Scotland.  Maybe the same reason that it was very 'quiet' with not many visitors this year.
There were a few die hard potaholics and a few visitors ventured out in the cold to escape the seemingly endless TV coverage, of pageants, concerts and general Jubilee chit chat.
Anyway it's nearly mid summer and the weather is bound to get better and Laura at last can cast aside her winter woolies and bask in the sunshine with crowds flocking to buy pots.