The wrong kind of mud

As summers go, this one has been a stinker, it has rained and it has rained and all three recent events have been very windy, wet and windy or in the case of Art in Clay at Hatfield House, torrential rain with showers in-between. We set up with the imminent threat of rain, tried to sell pots in the rain, so heavy it streamed under the marquees and finally we travelled back in the rain. Trying to sleep in a tent has never been such fun and jokes about having Trench Foot occupied most peoples conversations. Festival spirit engulfed Hatfield, wellies and rain gear were the required form of dress and the mud at the entrance to the campsite and marquees had to be negotiated with due care. Stirling work by the organisers and crew meant that the show would go on, with tons of wood chips and plastic weather matting placed at strategic points. A modern addition to the estate of the four hundred year old Jacobean house still owned by the Cecil family.


The present house was built by Robert Cecil in 1611 in the grounds of the deer park and old house owned by King Henry VIII and in 1558 it was here that Elizabeth I learned of her accession to the throne. Camping amongst the old oaks where Henry and his court gave chase to stags held none of the former majesty. A motley collection of tents, yurts, tee pees and camper vans perched upon a grassy knoll, with the itinerant company of potters sheltering under makeshift awnings, preparing for the coming battle.
A temporary respite from rain allowed a short sortie and an opportunity to capture the gnarled oaks and enjoy the beautiful parkland before returning to the sea of mud that was Hatfield 2012. 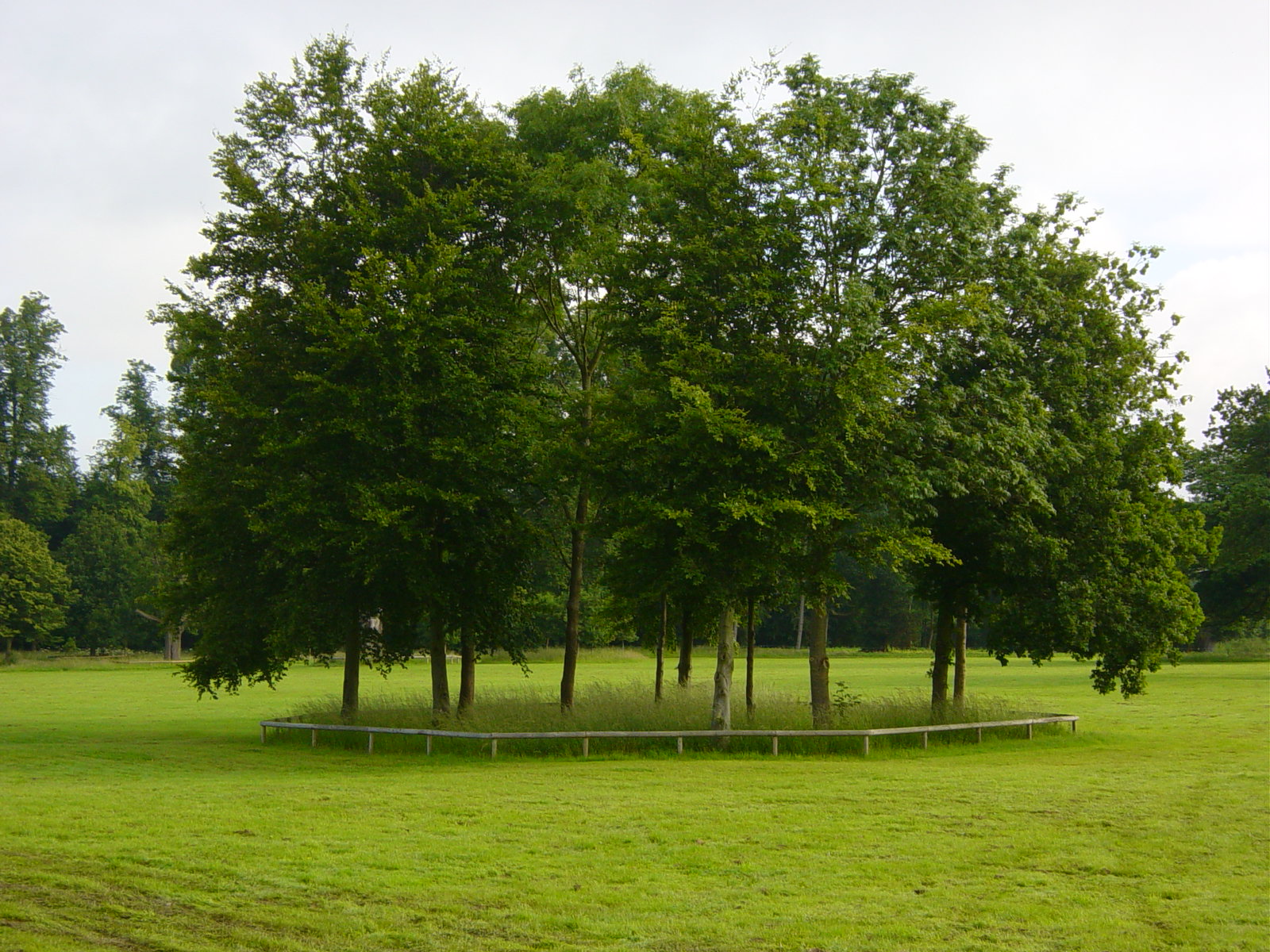 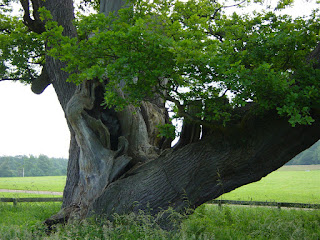 There was one ray of sunshine when Pinny Lady presented Richard Ballantyne with his special apron that he had commissioned. He wore it all day much to the amusement of everyone, the appliquéd cup cakes on the back giving it that special touch, and with his furled umbrella he was last seen disappearing into the visitors car park. 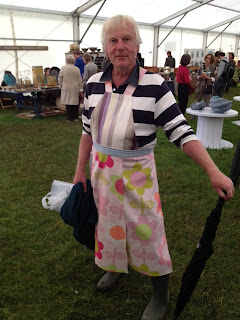 And that was Art in Clay, so now dry out the tent, make some wooden lids and my competition piece ready for Potfest in the Park held in Cumbria, the wettest part of England... Can't wait.
Posted by David & Laura Wright at 22:07 No comments:


Fitting in a firing of the wood kiln has been difficult of late, a residency and a couple of shows have meant there was no window of opportunity to glaze, pack and fire the kiln. The last event at Earth and Fire proved very successful and all the boxes with wooden lids were sold and there is not a single tea bowl left, so with Art in Clay at Hatfield House looming fast, a request for tea bowls and a Gallery order there was no option but to go for it. Luckily we have a pile of wood and enough pots made and bisque fired, so a few long days glazing and packing and a break in the wet and windy summer, there was a chance that if I fired on Friday the kiln would be cool by Sunday and pots could be ready for Hatfield four days later.
I didn't think about unlucky No. 13, it was not until I ran a printed log sheet and up popped firing thirteen. I am not superstitious and only gave a moments thought about impending doom or potential  disasters, but as I packed the kiln on Thursday afternoon, with storm clouds swirling and an angry mauve and yellow cast about the black clouds above me, and as the thunder rolled and lightning cracked, I thought about the sanity of standing under a tin roof with wet hands standing in a puddle of rain. The rain became heavier and the wind reached frightening force, I was trapped and would have to sit this one out and tried to carry on packing. The rain got heavier and hail started to ping off the tin roof   it became a torrent and as more hail lashed down, pieces the size of golf balls were bouncing up and hitting me. The gutters on the house could not cope and the water ran off the roof like a water fall, as a river ran down the side of the house sweeping debris before it and piles of hail stones formed drifts, the wheel barrow, once empty was over flowing with water and frozen balls of ice like a strange cocktail.
The wind and hail stripped leaves off the trees, it cut down the peas and beans like a scythe as I stood in front of the wicket protecting my precious pots, peppered by stinging, frozen golf balls. 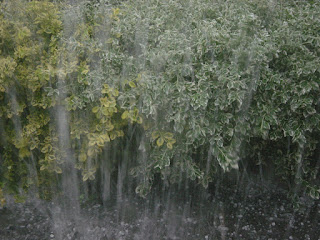 And then it was gone, the steady fall of rain became nothing. The car alarm was sounding, and the chickens emerged wet and bedraggled from their hiding place deep under the hedge and pecked at tit bits amongst the wreckage strewn about the garden as stoically I carried on placing pots surrounded by water and bits of garden. 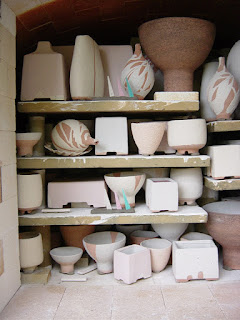 Firing thirteen was uneventful and followed almost exactly the same pattern as the previous firing, cone ten was again reluctant to fall in the lower spy hole, but the colour was good and I carried on, deciding to close up after twelve hours with the cones looking almost like the previous firing. 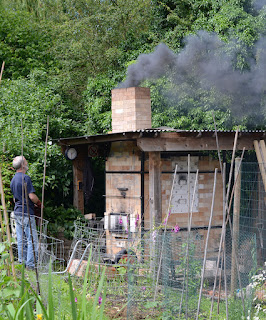 A day to cool and still over a hundred degrees showing on Sunday, we took out the bungs from the spy holes and eased out a few bricks at the top of the wicket. It still seemed hot so having survived the tempest on Thursday, we had a coffee break and waited a while until impatience got the better of me and just had to have a peak inside. It all looked pretty good no visible disasters and so down came the wicket bricks. 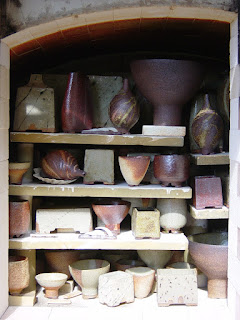 It looks like we were hotter than expected and the wadding is rock hard and fused to all the pots at the top, oh how I hate grinding off wadding, and wooden lids to make as well. Oh well, so much for the good life and quiet retirement. 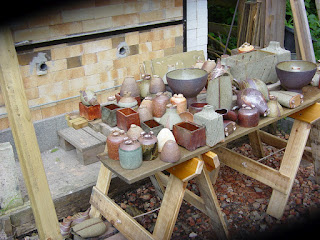