A wet and cold Potfest in the Park, a continuation of the miserable summer that has been 2012. Held in the grounds of Hutton in the Forest, a truly beautiful house and gardens near Penrith. This must be the most enjoyable event in the potting calendar, compact and well laid out in open sided marquees, not many events can boast that they have visitors arriving by helicopter.

There is a really friendly atmosphere at Potfest, with a potters competition, where everyone's art piece is set out on the lawns so that the public can wander around the amazing entries and cast their vote. In the evening there is a meal with prizes for the best entries, a mug swap ensures a very liquid finale, bottles of beer and wine standing like little forests on every table. Given better weather there is a camp fire and a few more beers before the revellers crash out in their tents and vans, to nurse sore heads the next morning.
This years competition theme was 'Journeys and Pilgrimages' and most potters entered work. It takes me ages to think of something, but I have to plan well ahead to get it made, dried, glazed and fitted into my woodfiring schedule, so I only get one shot at it and opening the kiln is always a bit traumatic should things not quite work out. Additionally I had to find a big chunk of wood, carve and oil it to complete the piece, which could only be done after the work had been successfully fired. I finally settled upon making a 'Ditty Box'.

When sailors enlisted in the Royal Navy, they were issued with a wooden lockable box, roughly 6"x 12"x 8".  It was to be their only private lockable space on board ship, and contained writing materials, letters from home and valuables. Called the ditty box, it travelled with them wherever they sailed. We still have Laura's grandfather's box circa 1912. 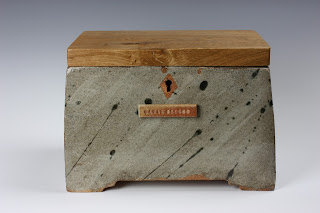 My Potters Ditty Box was similar in size and held my favourite tools so that I could make my pots wherever I may journey.

After Potfest it was home, dry the tent, refuel, pack more pots and set out a couple of days later for Oldenburg in Germany. Internationale Keramiktage Oldenburg 2012 is in it's 30th year and draws potters from all over Europe, I sent my application off more in hope than expectation and was delighted to be accepted.
The event is held in the town centre on the Schlossplatz right alongside the very impressive Schloss and Landesmuseum, the tents and market stalls resembling more of a festival than a traditional English market. 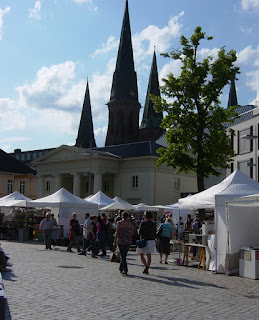 This presented us with a problem, at all the events we have undertaken, market stalls, tables etc are all provided. In Oldenburg you get a space marked out with chalk, 3 metres square on the granite cobbles.
Our friend Tina offered us her 3 metre square gazebo that she uses to stand Farmers Market, where she sells her wonderful cakes and biscuits. Only problem is it is bright orange and after much debate and no other real options we took it with us. 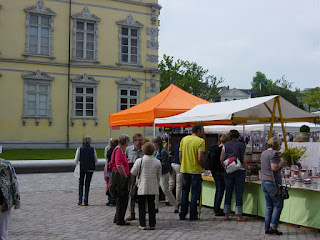 Big mistake, a distinctive landmark for sure, but the orange glowed in bright sunlight and cast a strong orange glow over everything underneath it. We looked like we had an Essex tan, and the pots took on an unhealthy pallor which put possible buyers off, especially during the middle of the day when the sun was at it's highest. Where is the rain when you need it? We did sell some pots, enough to pay for the trip, so I guess you could say we swapped some pots for a holiday in Germany.

Like Potfest there was a competition with a meal and prize giving, all very formal, long speeches and polite applause. 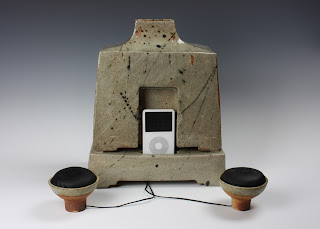 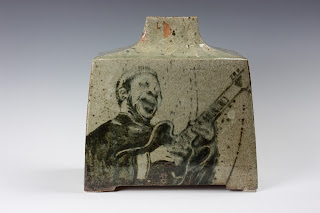 The theme for the competition was "iPot", my attempt was a bottle on a plinth, with a docking port and iPod connected to two headphone speakers sat in little cups. It actually worked and we ripped some BB King onto the iPod just to go the extra yard. On the reverse of the bottle was an image of BB King under painted in black slip. It was titled "iPot with iPod and icon".  It took way too long to make and assemble and most people just entered a standard piece of their work, some having no relationship to the theme at all. Translation is everything and the winning entry was a broken pot and a pile of shards on the floor. Evidently in German "IE!" is the utterance one would make if one dropped a pot. "Ohhh shit" suffices here, but there you go, it's taking part that matters.
The weather was glorious and we baked under our orange shelter. Summer at last and a stop over in Gouda on the way back to Blighty and it's back to work.