It used to mean going halves or sharing costs when you took your lady out. These days, selling pots gets harder and it seems that Laura pays the bills mostly. This year was the 25th year for Keramisto, held in the Mookerplas near Milsbeek in Holland and I was fortunate to be selected, part of a ten strong contingent of British Potters. It was also my birthday, so we decided to stay over a few more days and make a holiday of it. That part was a secret and a surprise, I didn't know where we were going after the show, but it seems everyone else did. I just drove the van where directed and enjoyed the moment.  Going Dutch? It was all pre planned and paid for.

We took the overnight ferry from Harwich and arrived at the Hook of Holland early, breakfast was orange juice, croissant and a cheese roll in the forecourt of a petrol station next to the E31. Lorries thundered by and the van swayed in the slipstream. We Potters really live the high life and having taken our time to get to Milsbeek, we still found ourselves killing time, sitting in the van as we had arrived way too early.

Spaces are not allocated, and there was a queue already at three o'clock, it seems there is a rush to get the best pitch. Not knowing a good pitch from a bad one, we bagged our space, sort of in the middle on the main aisle and set to fixing the canvas awning and staking down the feet of the market stall. Evidently it gets very breezy and the wind can whip in off the lake. Oh, a bad pitch means facing the lake, OK, never mind, we will take our chance. 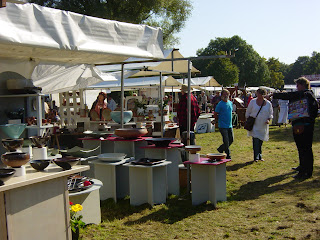 As if by magic it rained as we set up, much like every other show this year and we stood like Emperor Penguins, huddled under the awning until the rain stopped and then tentatively set out our stall. That evening there was a barbecue with salads, fresh bread, courtesy of the baking school and free beer in a large Marquee. Potters renewed acquaintances and swapped news until late, but by ten we were out for the count, been on the road too long and swinging on the awning to get the poles to locate had taken it's toll.

Next morning was bright and sunny, with a cool breeze. The grass was still wet from the rain during the night and the few pots we had put out were dripping with condensation, but by ten o'clock when the show was due to start, everything was looking good and hangovers were nursed with black coffee, brewed up on little stoves at the back of most Potters stalls.

Slowly visitors started to drift in and by mid day there was a steady stream, with plenty of things to entertain them, musicians, demonstrations and a competition for the Potters to try their hand and throw a pot on the wheel of a Trabant, that miracle of East German engineering. The car was set up on a jack so the front driving wheel could spin, so throwing was side ways on and in the driving seat in a glorious red ball gown the driver operated the throttle. A breakdown in Language, or maybe the din from the two stroke engine meant the driver couldn't hear and there was little control and the first few attempts were amusing to say the least. The aim being to throw a pot (or something similar) twenty five centimetres high. There were plenty of people prepared to have a go and the competition went on over the whole weekend, finally a two person throwing team, comprising of the two Richards, or the two Dicks as they announced themselves, managed to get within a millimetre of the target. 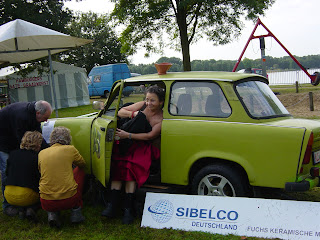 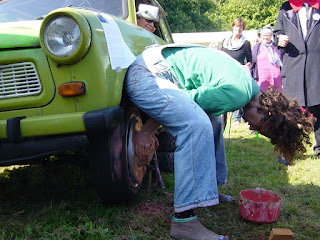 There was good food and drink to buy, and plenty of Potters equipment and supplies stalls. Books and magazines and piles of clay to purchase meant that bags with the logos of the suppliers were well evident but not much in the way of pot sales and by six o'clock as the last few visitors drifted away, there were quite a few who had sold nothing at all. Solace came via aperitifs and nibbles, brought by Potters who have done this show before and knew the ropes and then on to the Potters banquet, and more drinks, a drum band, a few more drinks and then a live band and many of us who never get up on the dance floor, found ourselves Dad dancing. An interlude with the launching of lanterns into the night sky and more dancing. 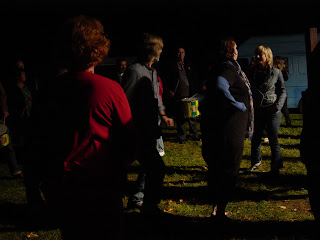 After the award of the main prize, the Pot d'or, decided by the Potters votes, there was an unforgettable skit by Richard Godfrey, Richard Dewar and Steve, based on a Derek and Clive sketch of a performer diving 500 feet into a blazing bucket. Then back to dancing and a few more drinks, well into the early hours. 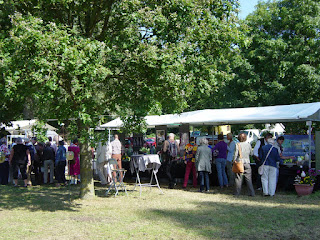 Amazingly everyone was at their stall next morning, ten o'clock sharp, ready to ply their wares. There were plenty of visitors, but much as the day before, few sales. Many visitors were pottery enthusiasts and wanted to ask technical questions, clutching bags of tools and magazines or they just took photographs for inspiration, and by the time I had given my short demonstration, the show was as good as over and as quickly as the show had sprung up, it all disappeared into cars and vans and all that was left was a field scorched by the tread of thousands of feet.

We sold very little, some sold nothing at all, maybe a sign of the financial squeeze gripping Europe. The streets of Keramisto are not paved with Euros after all but it was a helluva party and so off to celebrate on my surprise birthday trip.
Posted by David & Laura Wright at 20:32 No comments:

Well, another day, up at the crack of dawn, drive to another venue and set out my stall.  No promised electricity, so lugging the lights and power cables up the stairs was a waste of time and they all have to be lugged back because there is so little space to store them. 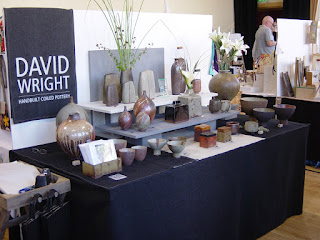 Satisfied that the display looks good, flowers plucked from the garden, still with the morning dew, are artfully arranged and it's time to check out the neighbours and get to know some new faces.
It's around this point that the doubts about doing this job start to become a reality. Am I really going to have to stand amongst people selling bought in mugs, tea towels and aprons all day, and so cheap? I would imagine that the creative hand touches them for the first time to get them out of the box from the manufacturer. And assembled jewellery with bought in beads by the boat load. Ah well, the show must go on but by lunch time having received only a few "Love your work" and "We might be back" things don't look too promising.
The pile of mugs is going down and so is the pile of tea towels. The girl with the dichroic glass pendants has not stopped wrapping either. It's about this point that the first ceramic student appears and wants all your glaze recipes, firing methods and as they haven't got a kiln yet, could you fire their work for them.
When someone asks if the pots are Raku, you finally know that this was a big mistake and staying at home and mowing the grass or cleaning out the chicken run might have been the better option.

When someone else asks "Are they Raku" The brain freezes momentarily, and just before you clasp them by the throat, it thaws and very politely one gives the best reasons why they could not possibly be any form of Raku.

And what do you mean by Raku?  Is that true Raku? Taking a white hot pot from the kiln after a couple of days of firing with wood and plunging it into water to get those beautiful black glazes beloved by the Tea masters or is it the garden party stuff where you buy a ready made bisque fired vessel, lather it with some noxious glaze slop, whilst someone else heats it up quickly with a gas torch and plunges the whole thing into a bin full of sawdust.
When the foul black fog disappears, it's plunged into water and you scrub it to reveal the final article in all it's bling and you go home clutching your prize, smelling like a smoked Herring.

I'm not a big fan of Raku, I admire the work of Tim Andrews, but do I want something I can't use, that fades and re oxidises and would poison me if I ate from it?

So for the record, no madam, they are all fired in a wood fuelled kiln to around 1300, cooled slowly and will stay that way or until the cat knocks them over at which time they become grog.

In anticipation of a half way decent show at Wirksworth, I fired the kiln earlier this week so that there was some new work to put out. Firing number 14 proved uneventful, apart from not having enough pots and having to load a few re -fires, it all went along as previous firings. It did not rain for a change, and it was hot and tiring. Cone ten took forever to fall at the bottom of the kiln, but the worry was needless and the results were pleasing, with a couple of big bottles that are the best for some time. 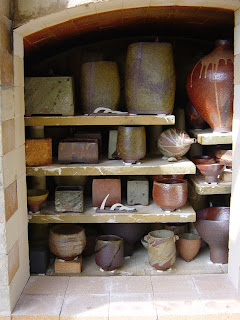 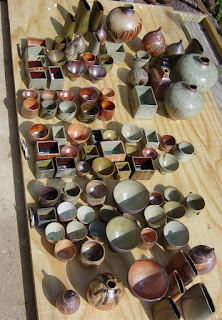 I still have to check them all over, clean off the wadding, but they are sitting on the table in the dining room, whilst I do a sort of post mortem, looking at how the glazes run and mingle. Was the glaze thick enough, which combinations worked the best and so it goes.
Tomorrow is another day and it's back to the Town Hall at Wirksworth for another day explaining what it is we do that does not involve sawdust  and smoking fish or drinking my tea from a mass produced mug with a scribbly drawing of hearts on it.