It's a hard rain's a falling

I'm a-goin' back out 'fore the rain starts a fallin'. The words are Bob Dylan's, but it has been hard this summer, and autumn and now winter is upon us and the rains still a-fallin'. Finally the saturated land has said no more and this week the garden where most of my work is done has flooded twice. The kiln was a little island and we had to evacuate the chickens before their little home became an Ark.
There is a brook that runs through our garden, this time last year it was dry and it was possible to walk along its whole length with no problem, not even a damp puddle. Further along from the garden, the brook goes under ground and comes out the other side of the village. If the grating to the culvert blocks up, then the whole village gets it and some of the houses flood.
Such was the intensity and duration of the rain this week, along with the amount of leaves, branches and debris suddenly unleashed, that the culvert gave up and within a couple of hours we had a rise of two metres of water. Thrussington Pottery was out of bounds until a handful of villagers, armed with rakes and hooks managed to clear some of the debris and the level subsided.
The kiln stands on concrete blocks, and the glazing shed was only millimetres from being submerged and I'm sure it will all dry out eventually, but for now it's impossible to do anything other than stare from the windows of our house. The only casualties were some small bottles left lying on the ground by the kiln, waiting to have their wadding removed. The waters must have swept them away and by now they will be on their way to the North sea. No messages inside, but if anyone out there finds them, please enjoy them and I'm sorry I didn't get round to cleaning them up. 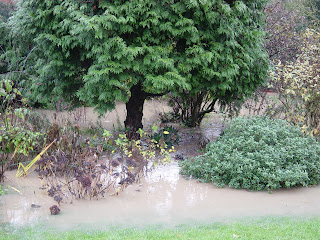 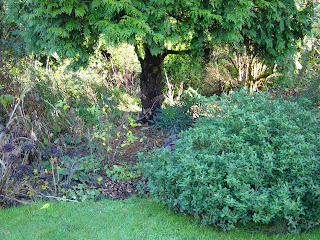 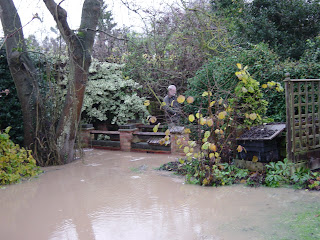 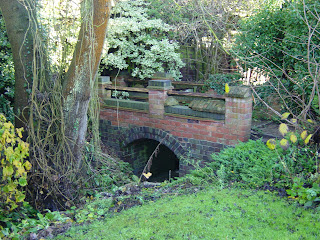 While we were away this weekend selling pots at Harley Christmas Market, there was a second deluge and flooding. The waters rose during the night, so there was no one around to wield hooks and rakes and the kiln and garden got it's second swim in a week, whilst a house was flooded further downstream most of the village escaped.

Stirring up the Beast

The first time I went to Marks Pottery he was building the Beast;  up to the chamber arch and it looked big.
"What cubic capacity is it"?
" I don't know, but it's big" 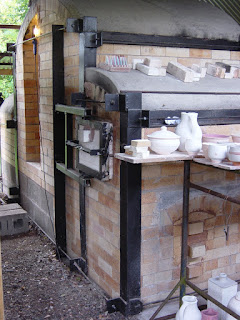 He fired it sometime later, and the results had not been good. Hot at the top, but only near the front, cold from the middle down. Barely cone 7 and none of the glazes had fluxed.
Lots of remedies were discussed and finally it was decided the solid bag wall was too high.
I went to stay for a few days to make pots and help with modifications. We lowered the bag wall and opened it up, chequer board style so that flame and heat would hopefully get to the bottom of the chamber. We took a couple of courses off the chimney to slow down the flame a little and keep it in the chamber longer.
Over a year went by, Mark had not made any new work and I couldn't possibly fill a kiln that size with hand built work.
Finally we decided to fire the kiln at the end of September and as I made pots, I put them to one side whilst Mark spent four weeks intensive throwing. September turned into October when we finally set a firm date, with a plan to fire for up to thirty hours. 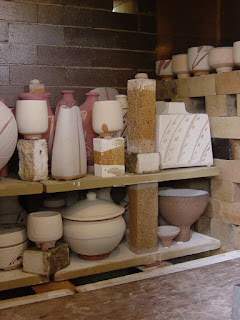 It took a whole day to pack the kiln, me glazing as we did so, as it was not possible to transport ready glazed pots from Leicester.
The kiln was heated with gas to drive out some of the moisture, finally the fire was lit at six o'clock the next morning and we were under way.
The kiln has a single chamber of approximately 80 cubic feet with a Bourry box. It's a scaled up version of Mark's previous kiln and the intention was to salt fire. It was decided that we would wood fire only this time, plenty of wood ready stacked, mostly Larch with some Cherry and Birch. Nice and dry as it had been there for well over a year.
Stoking progressed steadily all day and the temperature shown on the pyrometer climbed, the probe at the front showing about a hundred degrees more than the one at back, so we closed the dampers to try and even out the heat. It seemed to work, but progress was slow. By about midnight we were showing eleven hundred, but the bottom looked nowhere near that. But alarmingly the cones at the top near the front were beginning to fall. 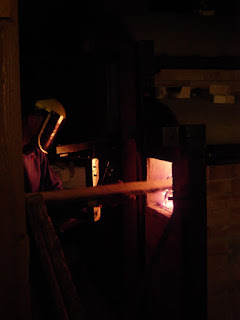 By six o'clock in the morning the cones at the front were all flat, but still standing to attention at the bottom and cone 9  hardly bending in the middle. Over twenty five hours and a final push to get the temperature up, it was time to call it a day and clam up. It did not look promising.

One hates to admit ones failures, but there was little to come out that was any good. Some tea bowls placed on the bag wall were ok, the bottles at the top near the front were dark and had an oily appearance, every thing else was way under fired and dirty. I will re fire some of the pots in a gas kiln to see if that cleans then up, the rest will go into the next firing as they are little more than biscuit fired.
The shard pile will get the rest.

Mark tells me the Beast will be demolished and already plans are afoot to build something smaller.
Maybe a Phoenix rising from the ashes!