Oh Doctor Doctor please the mess I'm in.
My body aches and I feel dog tired,
My eyes are gritty and my arms are lead,
I've been outside to clear my head,
But I know there's no cure, just rest and wait.

Waiting for tomorrow. It just seems a long way off, no way round it, standing looking at the kiln just does not help. Too hot to touch and the ping, ping, ping as the pots settle is too disconcerting. I just stand staring at the heat shimmering off the chimney. The chickens pecking up the insects killed by the heat. Crane Flies with their ungainly flight, collide with the hot bricks and provide Sunday roast.
I need distraction therapy, even going shopping has been considered. It's intense, hard work firing a wood kiln. Two days packing, glazing pots, lifting heavy batts into position, stacking bricks and wood, chopping kindling and finally the actual firing itself. Once started there is no going back. Light a small fire outside the kiln and slowly introduce it into the firebox. This first part is easy, let your thoughts wander, try to imagine the outcome. Will the glaze run? Will the fly ash leave it's blush on a bottle's shoulder? Who knows, expectation is one thing, reality will be something else.
The first few hours are steady work, go too fast and two months work is lost.
Some action around the 850-900 degree mark to try and get some body reduction and then the real work begins. The heat climbs, the momentum builds, reach 1250 then maintain it. The firebox heat is fierce, protective gear offers some relief. The last four to five hours the concentration is full on, the heat draining. Only a mere fifteen hour day, try selling that to the bureaucrats in Brussels and their working directive. Then at last the final stubborn cone falls. It's done. Block up all the air ways, go eat and sleep. 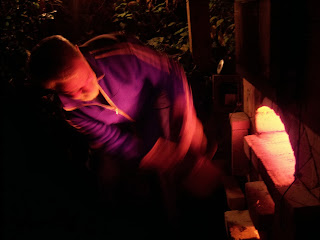 And that's my problem today. The culmination of making all those little pots was yesterday and today there is nothing that can be done but wait, worry and pace about.

Apologies to UFO
Posted by David & Laura Wright at 20:21 No comments: 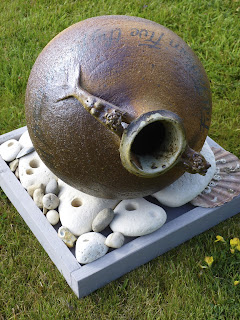 Competitions are becoming a feature of some of the Ceramic Fairs that we do. There is usually a theme given and everyone is supposed to go off and produce a piece of work, inspired by the title given. No one gives away their ideas, secrecy is paramount. You can imagine pools of light from shed windows as potters burn the midnight oil on their creations throughout Europe.
It's fun and a good way to generate interest. The public derive great pleasure, wandering through the plinths displayed on the manicured lawns at Hutton in the Forest during Potfest, with slips of paper ready to cast their vote.
Now you can take the easy route and use a piece of work from your repertoire, write some clever words to justify the choice and surreptitiously slide it onto the lawn, or do as most do, spend weeks or at least many hours toiling over ceramic creations.
Faced with a title of so few words, creativity deserts me and weeks are spent trying to come up with that killer idea. Seeing all these wonderful, witty, amazing works of art on their plinths, I wonder why I never thought of that as ideas start to flow. Weeks too late of course, the die is set.

The garden around my workshop is littered with pots that never quite made it to the shard pile. It is the resting place for most of my competition pieces. Pots produced after days of toil never quite reaching the heights of my expectations, lie like shipwrecks amongst the gravel and Alchemilla Mollis.

I am not a blank, white paper creative. I find it's emptiness quite scary. My creativity needs a kickstart, I'm more of a problem solver. My work evolves, brick on brick, an accident observed and worked on, needing a 'wonder if' moment. There are no summer revolutions at Thrussington Pottery. I guess that when I look back at stuff made five years ago, things have moved on, more refined, more subtle, shapes have changed, but no one can wait five years for my master piece. So I stare at the title and end up doing the first thing I can think of when time runs out and panic kicks in. Usually because I HAVE to fire the kiln because I need the other work it contains.
So this year, determined to make a more timely effort, I started to take it seriously the moment the task was issued.
You would think that 'From the Sea' was a gift as a theme, all those fishy puns trawled up shoals of ideas. But wracked, or should it be wrecked with indecision, I started construction on the first half decent idea my addled brain would spawn.

An Amphora, with reclining mermaids for handles - an inscription perhaps ... some lines from Shakespeare's Tempest?

Full fathom five thy father lies; of his bones are coral made:
Those are pearls that were his eyes:
Nothing of him that doth fade,
but doth suffer a sea change into something rich and strange.
Sea-nymphs hourly ring his bell:
Ding-dong.
Hark! Now I hear them,
Ding-dong bell.

As a graphic designer, a bit of brush script should be a doddle.

The only thing about all this is, it makes you attempt something outside your comfort zone. Problem is you only get one shot at it, if you screw up, then you miss the tide. 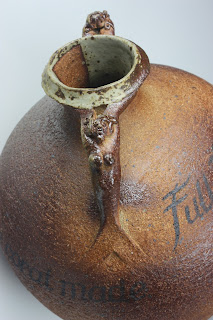 The Mermaids must be the first figurative work that I have ever attempted and painting all that lettering onto scraped, crank clay is not the most sensible thing I have tried. As always, the weakest link would determine the final result, and despite choosing the quietest part of the kiln and placing big pots all around the amphora, the amount of fly ash that found it's way all over the pot, was way more than usual or expected and a 'brown pot' emerged. All that painstaking calligraphy, completely obscured.


It seemed appropriate as the title indicated, to return this pot to the sea from whence it had emerged as the birth of it's creation. On a recent trip to Flamborough Head, we did just that. Waiting for high tide, the vessel was committed to the sea.
I was all for leaving it to it's own fate in the surf. 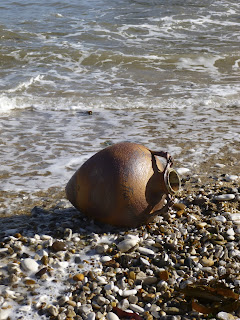 Laura said that would be littering. Not sure if she meant that the pot was rubbish or more concerned about leaving yet more flotsam on the beach, so it came back home to join the rest of the pots on the gravel. 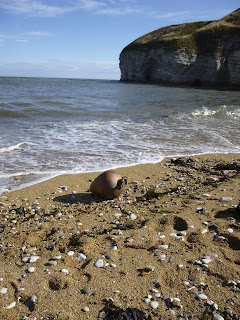