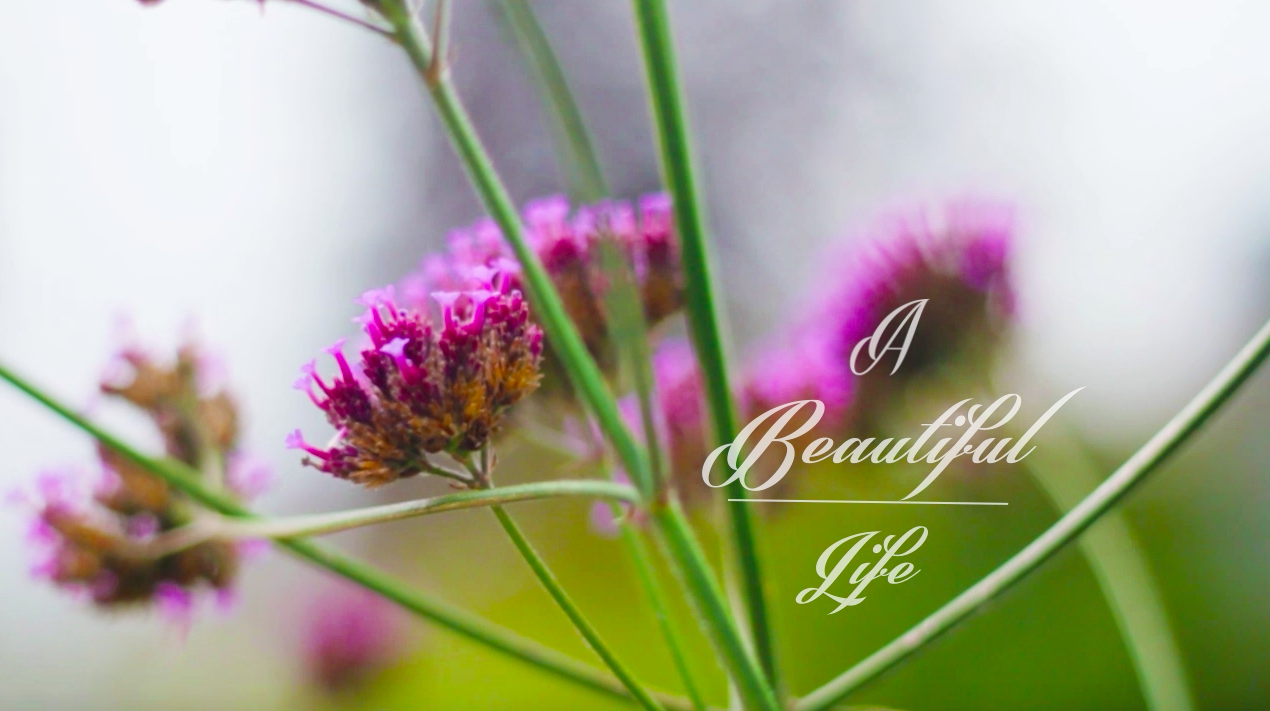 A short film by Kristian Barrett.

I've never made a film, Kristian has never made a pot.
It was an email out of the blue that brought us together. Kristian wanted to make a film about making pots, I happen to make them. He did not understand that the whole process of making a pot takes several days; longer than the day he thought we could set aside to film it all. So I drew a story board, like a comic strip, about the journey from clay to finished vessel.

We met and toured the workshop, garden and kiln site, discussing all the things that we thought we could cover. The original concept was for a film about two and a half minutes long and embed it on my website. Kristian wanted it to have an educational theme and tell a story. I didn't want an ego trip with endless shots of finished pots. We both wanted something calm and rural. So we went our separate ways to think about it. Eventually we came up with a directors treatment, a sort of written/visual script with ideas for little shots to link the film together. Filming eventually started one sunny September day. 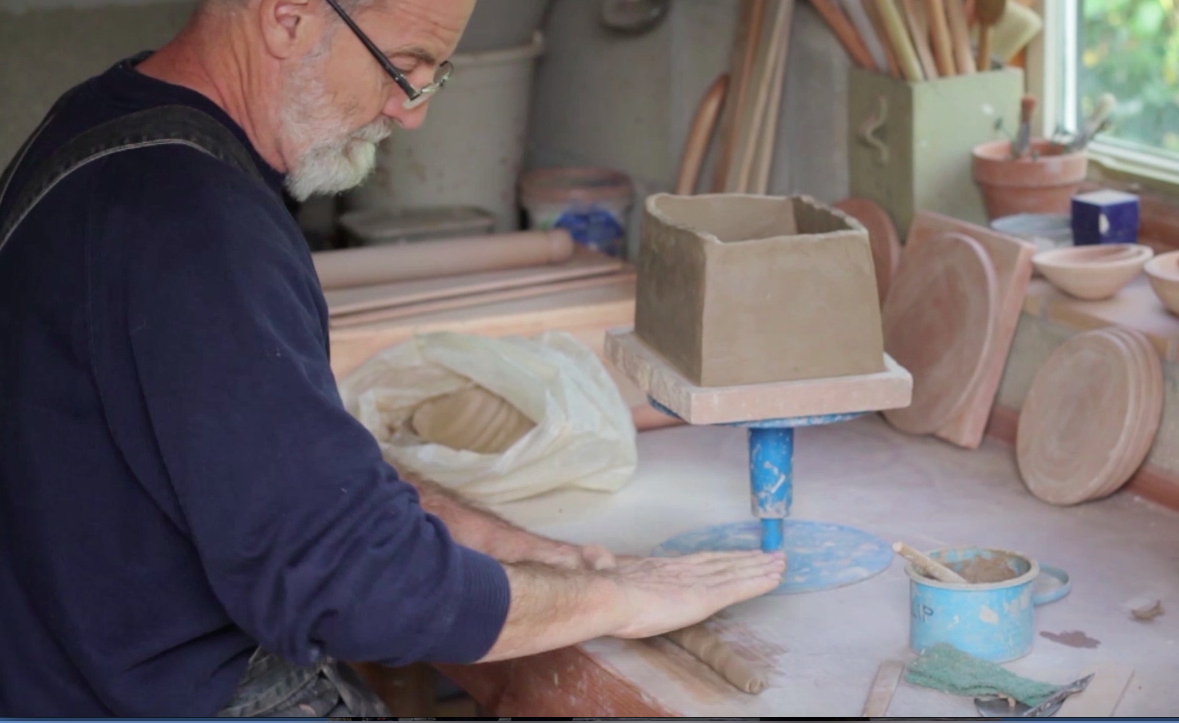 The thing about filming is the time it takes to produce just a short piece. Setting up tripods and sliders, rigs and sound. Moving angle, doing it again... and again, shooting everything several times. The first session was spent with me looking out of the window, making tea, boiling the kettle, walking endlessly in the garden and we never even got near to looking at clay. Only the part of me looking out of the window made it to the final cut. Over four hours filming in the garden, recording the hum of bees and waiting for a Wood Pigeon to say something, only made for a few seconds in the title sequence.
We like to think we live in perfect, peaceful, rural bliss, but try to record Bee song and every Ryanair flight to East Midlands goes over, every motor bike at full throttle goes by, then the builder next door starts to knock holes in a brick wall, it starts to rain and the light goes.
It took five sessions to get it all, I made lots of bits of pots and everything had to be shot out of sequence. This is where the story board is useful, but even so ideas popped up as we filmed. Kristian thought folk music would be good, I prefer blues... discuss! 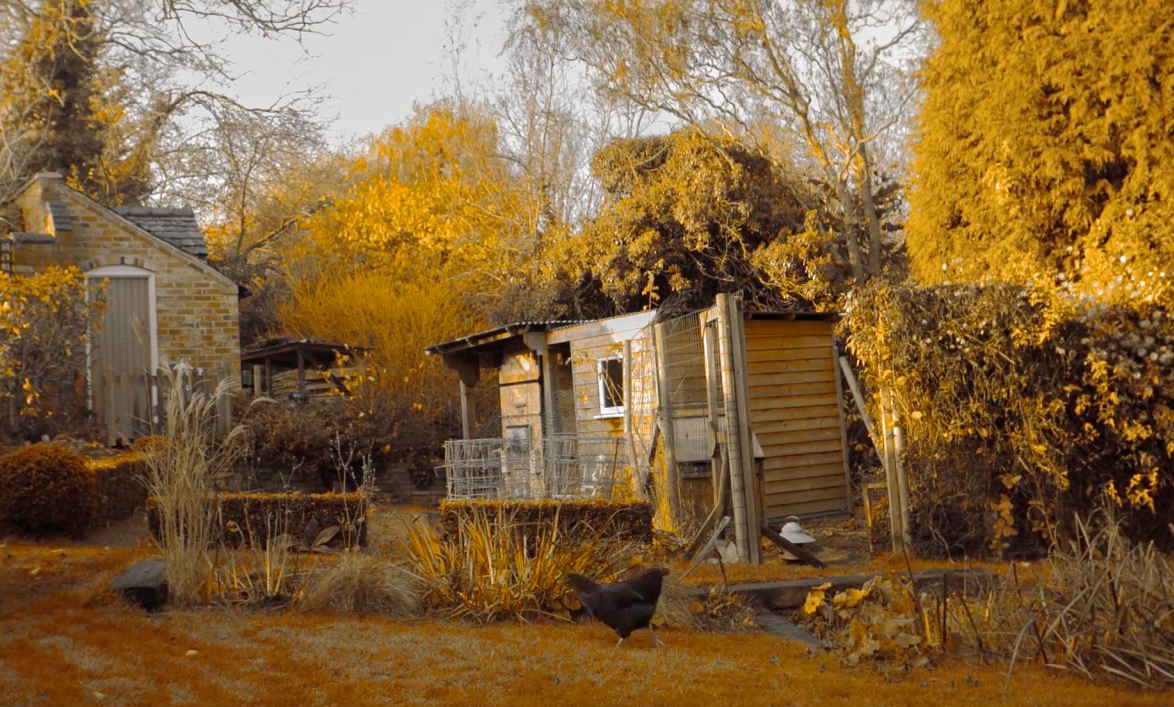 Editing took several weeks, sound and graphics are added right at the end, the wait to see it all seemed, like, forever.

I'm really pleased with the final result, yet it still seems very strange, watching yourself at work and hearing your own voice. The two and a half minutes became eight, so that still leaves over fourteen hours of video on the cutting room floor. Much the same time and effort to make the square bottle featured!

Around the end of December the media is full of reviews about the moments that made 2014. As January kicks in attention in the newspapers turns to an obsession with New Year resolutions.
The promise to eat sensibly, drink less and exercise more sounds more than revolutionary for some people, let alone changing what they make.
I don't think that I've ever made any rash promises to change my life style just because a New Year has dawned.
There is the opportunity to think about what I make and move my work in different directions though. All the applications are out there somewhere for ceramic markets and fairs, but right now there is nothing pressing. We are in a state of hibernation, no deadlines, nothing booked, no orders for more of the same, so it should be easy to make work that moves on from what has been seen before.
Except that when confronted with a clean, clear, empty bench, some nicely wedged clay waiting for the first finger marks, the ideas that I thought I had have all deserted me. It's very tempting to keep safe, making the pots you know sell well. Green pots for instance out sell brown or red, vases always disappear and there is a steady flow of requests for more. Visitors at craft fairs have pretty conservative tastes and look for what they thought they saw you had before, even if it was five years ago.
" Do you have any of those vases you make"?
It's easy to become trapped, I could probably make beakers blind fold, except that's not what it's all about and definitely not what I set out to achieve.
I'm not good at revolution. I work in a slow deliberate kind of evolution. Doing things that sort of worked before, held promise, but push it a little further. It may be a new form, but when I think about it, I've probably done it before because whatever I make has my handwriting all over it. 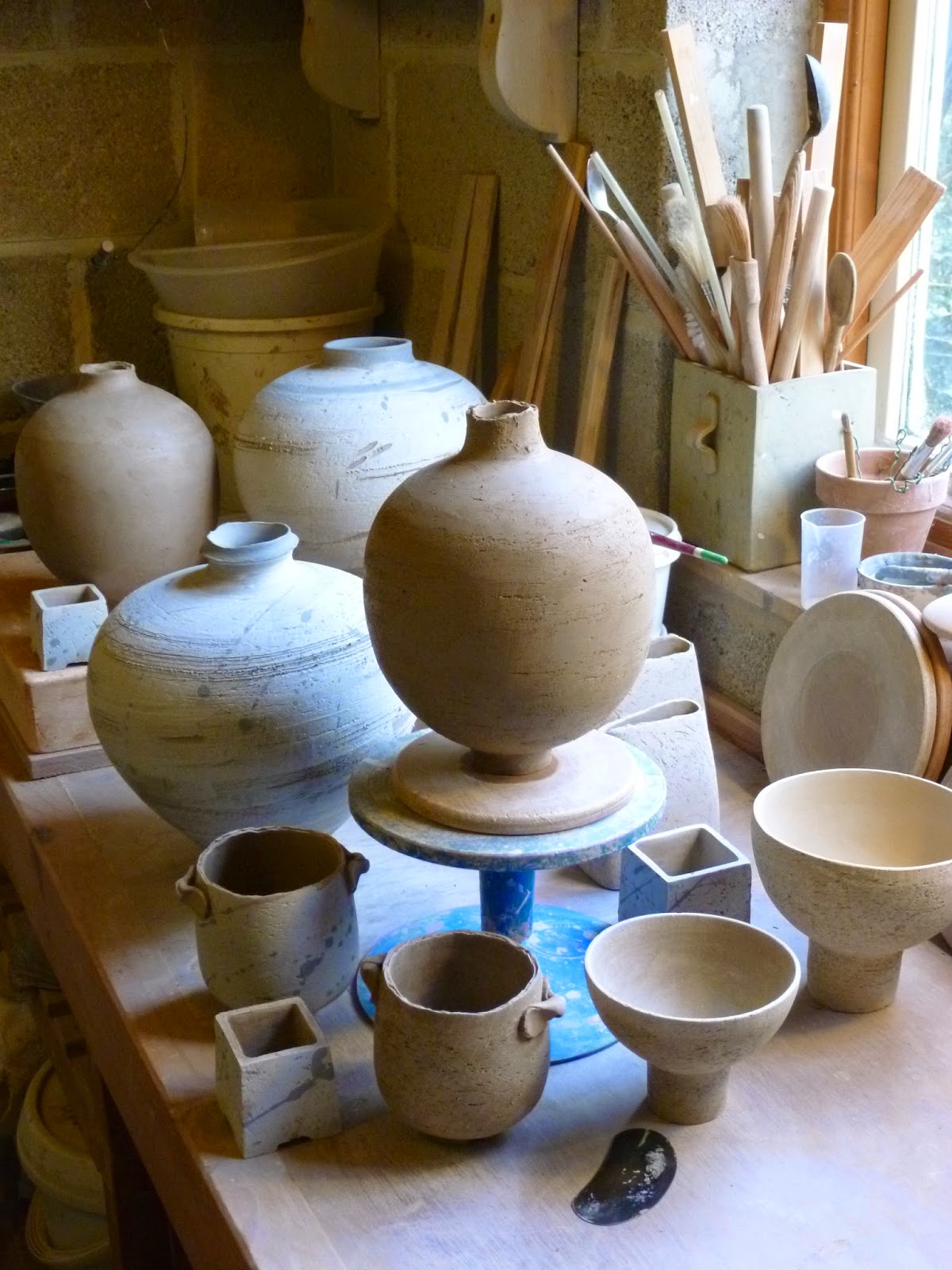 I've started to use slip more and more over the last year, the pots I used to make were very plain. I was quite happy with the naked, textured clay and the marks left by the fire. Forty years as a designer  has made me design my pots, never having trained as a production potter, I lack the brush skills and slick repetitive approach to painting grassy leaf motifs that seems endemic in British studio pottery. So I flick and speckle, splosh and daub black and white slip onto my designer, cheese hard clay. Wiping with a finger, scratching with a worn, old wire brush, poking with a bit of wood. Leave it for an hour or so and take a fresh look, flick a bit more. It makes a glorious mess, the floor, the walls, the bench, but this is about as free as my control freak nature allows. Examine small areas of the vessel surface and it looks exciting and full of promise, but try to repeat it and it's doomed to failure. The wet slip has an unctuous depth and lively surface, but leave it a couple of days and as the pots dry out all that changes and a grey monochromatic, flat look is left. It will take a glaze coat and a spell in the wood kiln to release all the promise, but all that is in the future and right now I need to make more to fill the kiln. My small New Years revolution is arrested until the kiln has been fired and opened, the new work viewed and evaluated so the next mini revolution can take flight. 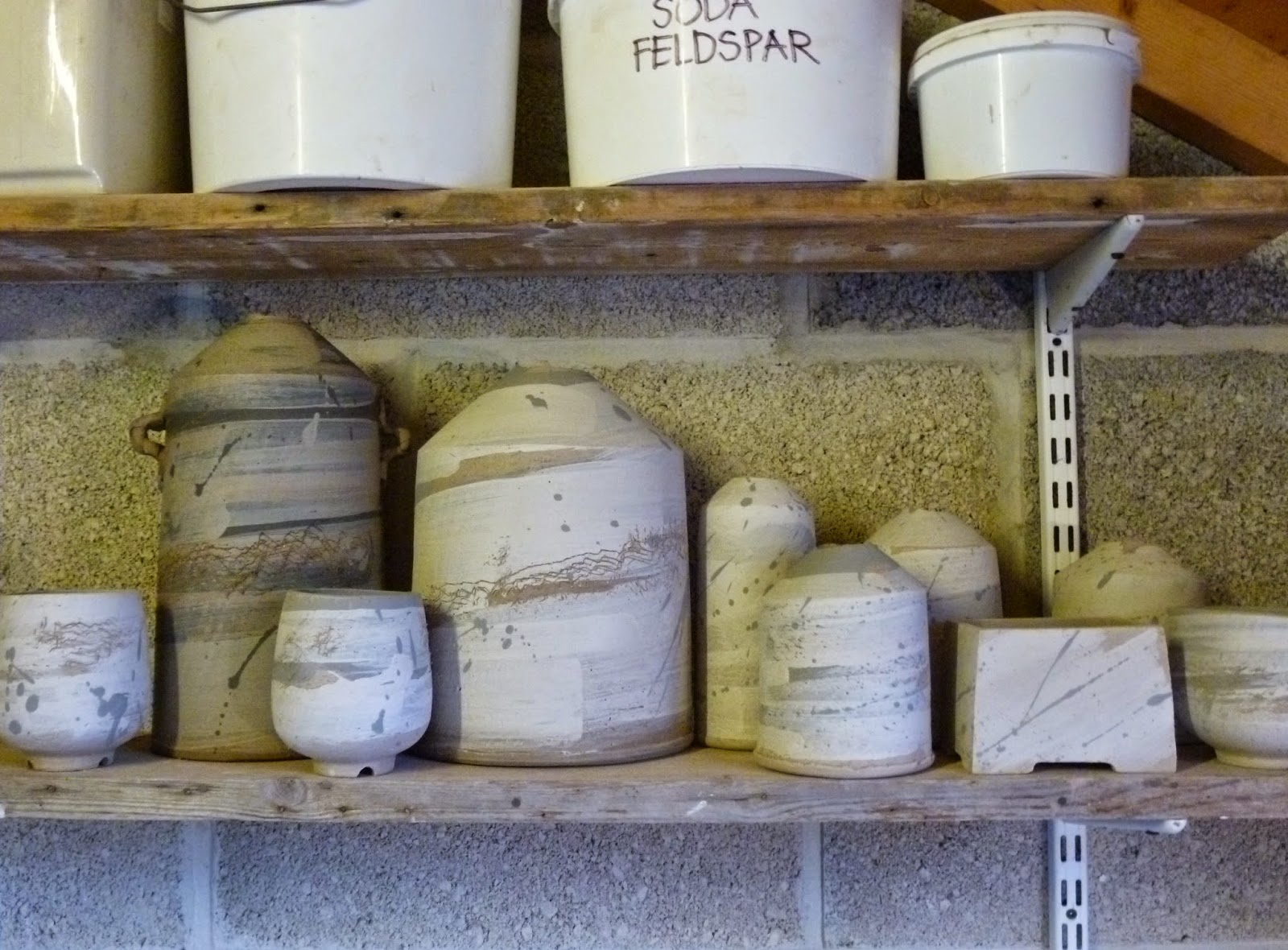