The Toad in the Woods

So, I joined a wood firing group. I didn't have much experience of wood firing at the time, just a weekend course building and firing a very simple kiln, watched a few videos, read everything I could lay my hands on.
I liked the warm and varied surface on wood fired pots and had decided this is what I wanted for my work. 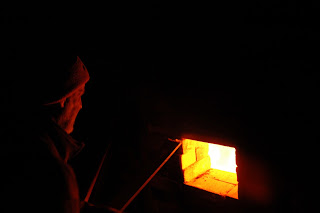 There were two kilns; The Rocket, which looked like a train kiln with a Bourry box. No one was sure about or very interested in this kiln. We fired it once, it was temperamental but the result was mildly pleasing. The other kiln resembled a half buried tunnel with a chimney at one end. Everyone was obsessed with the Anagama kiln, it was regarded as sacred, revered and the only true way for any real wood firer.
It was known as the Toad, short, low and wide, it's origins surrounded in folk lore, there were many claimants as builders, many notable potters had fired this kiln, hidden in the woods at Rufford Abbey, but all had moved on.

The membership fluctuated, on paper there were about twenty to twenty five members, a couple who were "Full time" potters, but most like me, just wanting to experience, learn and get a few stunning pots out sometime. If there were twenty members, so there were twenty different ideas on how to fire the Toad, as in all groups there are so called experts, delegators, leaders and those that just get on and do it. Splitting and stacking wood for example, a basic and necessary part of the process, but it was always the same two or three that pitched up. It's surprising how many wood firers have bad backs.
If there were many views as to how to make this beast offer up the kind of work that everyone ogled at in magazines, then there were as many different kinds of ceramic endeavour to fill it.
There were objects in porcelain, constructions in paper clay, amorphous shapes, sometimes vast in scale. There were traditional vessels and more mugs than you could poke a stick at. Every type of stoneware clay was employed, with secret ingredients to promote flashing and fire colours, dripping with glaze concoctions to satisfy the most ardent alchemist.
Each of these had to be placed in a specific location. Work would arrive unaccompanied in plastic crates with little diagrams to show how and where to place them. Everyone was 'allowed' ten to twelve pots each firing, but in a democratic process worthy of FIFA, some managed thirty or so and ten large amorphous sculptures always managed prime location at the front by the fire box, where it was hoped lots of ash would settle.
A logistical nightmare and not without some petulance and letters of resignation.
There were long debates about wadding recipes and types of wood to fuel the kiln but all this and five days and nights of endeavour, produced uniform drab, grey and brown pots. The flashing never flashed, the fire colours faded with the embers, partly because it was insisted that the kiln was closed in reduction. Jamming the fire box with wood then closing every orifice with slurry in a vast cloud of dense black smoke. All that carbon and unfluxed ash, it seems we never observed what the Toad was trying to tell us.

Finally it was time for me to move on. My last appearance at Rufford I was down for the graveyard shift,  eight till four, no one really wanted to do it, I quite enjoyed the solitude, watching for dawn to break, listening for the burst of birdsong. Arriving only to find the kiln completely jammed with wood, not even space for another splinter, the temperature down to where it had been the day before. It took all night and most of the dawn to clear the wood and get back to where it had been twenty four hours previously. The next shift didn't appear either so eight hours became sixteen.
They ran out of wood next day and the end result was very disappointing. Despite all this , I learnt a huge amount, sufficient for me to have confidence to go my own way. ( I don't use any of the wadding recipes either). 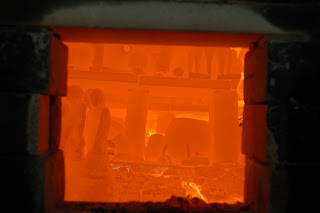 The Toad finally became a victim to poor maintenance and the health and safety police. Firing a large kiln at night doesn't fit the requirements of a risk averse organisation. Thousands of years of wood firing knowledge does not satisfy some job's worth's need to mitigate all risk and put the process on a memory stick. 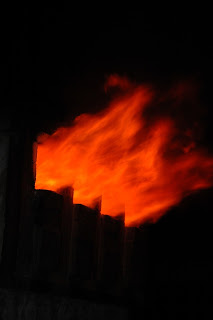