An Appointment with Mr. Boswell 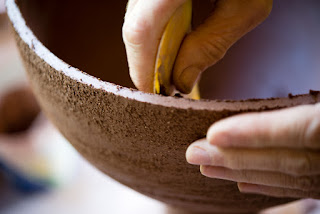 I was familiar with the photographs by Ben Boswell. He photographed Dame Lucy Rie, David Frith amongst others, but I had only seen pictures, we had never met.
It was at Art in Clay, Hatfield this year, whilst I was lost for the moment, trying to coax some over dry clay back into shape, he appeared in front of me. He politely asked if he could take a couple of pictures of me trying to make a box shape and asked if he could visit me at my workshop sometime; take a little longer, take some studies of me working, when he would have all his camera gear with him.
In the summer months I can be elusive, I am not good at remembering my mobile phone and when I do, forget to switch it on. Most of the time I have been criss-crossing Europe and time in the workshop has been limited, so photographic sessions got forgotten.

I next met Ben at CoCA at the opening of the ceramics gallery in York. As usual he was behind a lens, covering the opening of the new Museum and Gallery, snapping the gathering of collectors, potters and academics.
He asked me again and we fixed up a few possible dates.
I don't like having my photograph taken, I freeze, don't know what to do with my hands. Force a smile that looks like I'm in pain and wish the whole occasion would be over quickly. Very quickly.
I hate even more, looking at the pictures afterwards. I have been very successful most of my life in avoiding people pointing cameras at me as my family will confirm. So there were a couple of days of anxiety and worry before he was due to arrive. 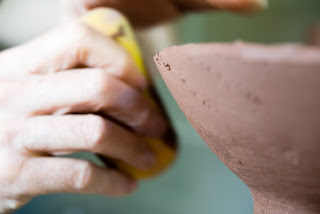 I decided that if I was to be immortalised, it would be making big coiled bowls. My favourite, I revisit this shape over and over. The failure rate in the kiln is high, because they warp or some foreign object drops into the bowl, no matter how scrupulous I am, but the pleasure and challenge in making is worth the disappointments. So by the time Ben arrived there were two or three in various states of completion, with bits of plastic and sponge and a pile of scrapings on the bench. Yeah, it looked pretty much like it always does, no tidying up or time for make up!

My workshop is tiny, so we had to prop the door open and shoot through the open window; it was a glorious day and the morning light was perfect.
I coiled and scraped, squinted and frowned as I worked, blocking out of my mind all thoughts of being captured forever in pixels in 500 photographs. 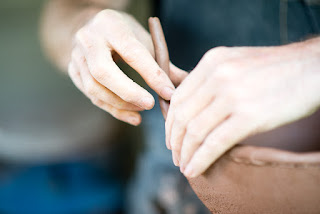 The two hours that we put aside became three, with the more formal portraits taken at the close of the session when I didn't care any more. A few poses in the showroom and we were done. 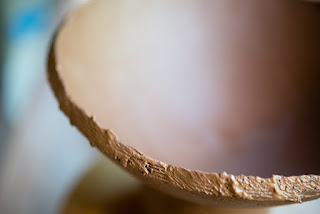 Making pots is something I've been doing for a long time, it's something I've always wanted to do and I am blessed that I can now make what I like, when I like. It's a very personal activity for me and sharing that is something I am not used to. Seeing the DVD of edited shots that arrived a week later was quite an apprehensive moment. The still frames capture exquisitely the making of a large coiled bowl. It's then that I notice what slender fingers and girlie hands I have, the intense stare and frown of concentration. I am bowled over by the beauty of the light on the surface of the clay, the ghost of a fingerprint on the wet clay, the almost abstract qualities held in the close ups. Even a couple of the portraits are acceptable to me, it's amazing how a true professional can make such beauty out of something as mundane as playing with mud! 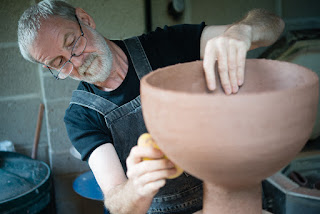 Thanks Ben.
All photographs by Ben Boswell - www.benboswell.co.uk
Posted by David & Laura Wright at 21:09 No comments: