Back to the Blog

It's been a while since I wrote a blog; a long while. Not a case of writers' block, more a case of writers' cramp.
First there was an email interview with Klei Magazine, lots of back and forth emails. I'm told it was a good article, my Dutch isn't too strong so I will go with that.
Then I was invited to write a profile for New Ceramics (Neue Keramik). That was a bit of a challenge, I thought that it ought to take a different slant and introduce another perspective from the stuff I wrote for Klei and another batch of photographs. It was a tight deadline, but I got no response or acknowledgement of receipt, so it sat on the editors desk in Germany. Having got revved up to writing, I decided to submit a draft to The Log Book. That was in March. Purely about my journey to wood firing my work.
After some time a favourable response came through from the editors, with apologies for the delay, they had been away at a wood fire conference. The draft was returned full of editorial corrections, suggestions and anything approaching light humour was red lined. This obviously was serious stuff and called for a bit of head scratching and a while to think about it.
I made corrections, wrote new stuff, did some research, took some new images and sent it off again. It was a while before it all came back with a few more 'suggestions' and a demand for images at high resolution. Really? I shoot all my pictures at high resolution, it has not been a problem before.
Sorry David we have been away at another confe
rence and we would like your material back straight away. Plainly picky people, The Log Book is an A5 quarterly aimed at wood firing folk, probably all those sitting in wood fire conferences.
Meanwhile, out of the blue my profile appears in the May issue of New Ceramics, it drops onto the doormat only seven months after writing it. Elated, it looks great, I am chuffed.
Our Broadband is the pits, so I send my retaken, high resolution pictures and revised text off on a CD to Ireland, emailing to say that I have done so.
The editors are off again on another jolly. It's now urgent, they want to publish in the August issue, please send straight away so we can pick it up on our travels.
I tried Dropbox, but it compresses the images, I tried MailBigfile, eventually I got them off.

Well into August an email pops up. "We are dropping your article - too close to the article published in New Ceramics".
Not so chuffed and not elated, so much time and effort, it may get published at a future date with some further alterations and some new pictures. We will see.

So you can understand why I haven't written for a while, apart from an artist statement for an exhibition at the Ropewalk, I'm fed up writing about me and have concentrated on making pots and firing kilns, but there is loads of stuff that I'm itching to write about, so here goes. 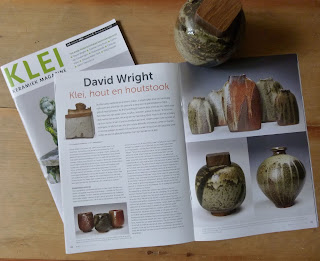