The Dark side of the Moon.

When Bernard Leach brought back a large, white, ceramic storage jar from Korea and presented it to Lucy Rie, he could not have imagined what he had started.
That jar now sits in the British Museum. A large round and very ordinary storage jar for pickled vegetables, with charming irregularities in it's form, a give away to it's hand made origins.
The now famous ' Moon Jar '.
There are many others of course. The Art Institute of Chicago has one (as shown below). The Asian Art Museum in San Francisco has one also, and no doubt many other big Museums have theirs also.
Each museum also shows various contemporary attempts by 'Leading Japanese potters' for their version. ( Where are the Koreans in all this)?
Just a simple storage jar, spherical in form with an opening big enough to easily get your hand inside to get the contents out. A tile with a stone on top to close it, the round shape to deter vermin scaling the sides.
Some potters are now spending a large part of their careers making ' Moon Jars'. From the large to  the ridiculously small, the scale and proportions of the original lost in time. Decorated in all manner of ways, from tasteful wavy lines or piled with wood ash, rust or smeared with handfuls of feldspar slip. They come in all colours, green, blue or even orange and red (Shouldn't that be a Mars Jar)?
They come in their hundreds, if not thousands, lined up on shelves like a row of bare arses at the windows of coaches full of drunk football supporters.
But come on guys, are we not missing the point here. It's called a Moon Jar for a reason. An almost perfect orb with a cold white, lunar glaze. A simple name and a simple concept, the clue is in the name. 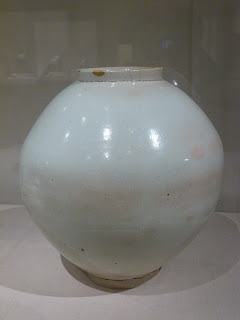